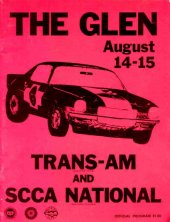 A race at the Glen always bears a kind of magic; something seldom seen elsewhere. That has a 10-year old boy, on visit from Australia and bearing the looks of a future rock-star, take a Scottish preschool girl by the hand; and gaze at those endless eyes that serve as headlights on Becnel’s deep blue Firebird. Convincing old Mike that he hears the boy whisper something along the lines of: “The devil inside, the devil inside, every single one of us the devil inside.”

And the girl, already stoic as a diva by far her elder: “I… I come from Detroit city. I… I’m hard to satisfy.”

It was the magic that made the Glen enjoy a half decent stuffed grid for its round of the Trans-Am series.

Twenty cars made it to upstate New York for a race on the redesigned short layout of the North Eastern track. With nine TA2-cars and 11 TA1’s, the field even refounded some kind of a balance between the different classes. The sense of European ladies being swamped by a mob of American vagabonds that marked some of the previous Trans-Am races had somewhat dissipated. The grid instead glittered with the serpentine allure of a score of rovers courting the school princesses on prom night. German and American nuts and bolts swayed together in tender friendship. And as the starting flag dropped, they all set off to play like brothers do: Camaros and Alfas, brothers from a different father; Mustangs and Escorts, sisters from a different mother. And together they played, like only brothers can. It had the bearings of an enjoyable afternoon of racing in the making and, as the entire field sped off towards the Esses, only one question remained.

How would attrition be?

And lap 1 already had one fear for the worse in that respect. The starter abided his time to wave the cars off. The resulting long wait on the grid was more than Ibanez’ brakes could digest. As his big Camaro desperately needed slowing for the Loop on lap 1, the darn things blocked. Alberto’s car summersaulted over the grass, sliding sideways and coming to an ungentle stop against one of the concrete blocks marking the end of the run-off zone. Race over.

Lepihive had secured pole but Goissen did not waste time and moved straight into the lead at the start. Lepihive stuck with the BMW though and on lap 3 recovered the top spot.

White, Paulet and Ryon played peekaboo for about the entire 5 first laps. Martinelli in his nimble Alfa was just behind them; intensely scrutinizing the pack of wolves, like a hungry dog waiting for whatever crumbles might fall his way. Starting lap 6, White had a hearty eye out for Paulet’s thirteenth spot. The American tried to pull ahead on the approach to turn one but went in too hot. His 69 Mustang overshot the turn and slowly spun on the outside of the track. Then started slowly rolling back on to the racing line.

Paulet found himself somewhat blocked as ever-ready-to-seize-an-opportunity Gerard Ryon moved in on the inside of the turn. The green Challenger had Martinelli, convinced that the first of the crumbles were coming his way, hot on his heels.

Gerard got thumped in the rear left by the Alfa. That sent him spinning towards the inside of the track. Martinelli continued on the outside line, where he met the stricken White. Resulting in a loud bang as Martinelli’s Alfa and White’s Mustang made contact.

White’s car continued sliding over the track and ended hitting Ryon’s Challenger. The Belgian would make it back to the pits, where his car proved damaged beyond repair. Following a lengthy pitstop, White soldiered on only to retire one lap later with a broken engine. The man from Detroit went straight back to his renowned unassuming Daddy Cool attitude and was quoted: “Embarrassing, and my sincere apologies.”

Paulet and Martinelli both continued and endured the Glen’s misery for just a tad longer. They would both meet an untimely and solitary retirement.

Up front, Goissen was meanwhile back in the lead and now seemed to hold a firmer reign on the situation. No one dared gamble on Lepihive not having another monkey up his sleeve though.

Parker was the first of the Detroit beasts to more or less keep up with the BMW-Ford pairing. As of lap 13, his engine however started overheating, and the Brit had to back off. He would continue a steady course, in the end finishing an excellent 5th.

French driver Alain Maurice had opted for a short fifth gear on his nimble Alfa Romeo. Too short as it turned out. His engine exploded on the long run up the hill out of the Esses and the race lost another car.

Jereb was messing around with Becnel and Schurer; the latter two both in big 5 liter boasters. Jereb’s nimble Alfa more than kept up in the twisty parts of the Glen. But on the long straights, the humble Italian engine was no match for the fat Detroit tramps. Twenty-one laps of such harsh treatment was all the little Alfa could take. The dizzy engine blew its last breath and Raul’s day was done.

Occasional driver Canton was getting under Voigt’s skin. Voigt was recovering from an early off and was now hankering after Canton’s 8th position. The Dutch driver was clearly slowing the New Yorker down, but on the Glen’s straights, the might of the 5 liter Javelin allowed him to just stay ahead. Voigt soon had enough of that and decided that aggressive late braking was the apt medicine. J.P. made it stick and started edging away.

The New Yorker’s race would be short-lived however. On lap 41 his guts got the better of his wits and he spun out of contention. Earning him some decent scorn from his old mechanic.

By that time, another engine was about to buy the farm: Coxon’s Pontiac V8. Fifty-four laps had been covered and the field was down to 11 cars.

On lap 78, Sadoshenko’s engine would be the last one to meet its maker prematurely. The Russian was lost for words.

Goissen en Lepihive had now lapped the entire field… twice. Still, the race was not a bore as less than six seconds separated the Escort from the Beemer.

There was even more excitement in these final stages of the race. Just behind the leaders, Ray Riddall had been holding on to Plaçais for dear life during the best part of the race. Yves’ Barracuda was a ball of speed on the straights. But in the twisty sections, Riddall’s Alfa made up for its lack of power with sheer handling bravado.

In the very last turn of the very last lap, Old Ray put his nose inside Plaçais’ lecherous matron of a car and grabbed third from the French driver.

The result was a podium once more entirely occupied by European midgets. One BMW, Goissen, one Escort, Lepihive, and one Alfa, Riddall.

Small consolation for the American brutes was that all other finishing cars were Detroit muscle. Plaçais secured 4th in his Cuda, followed by three Javelins: Parker, Schurer and Canton.

Championship wise, Goissen again slightly reduces the gap to Lepihive, but the Ford-driver still hasn’t much to worry about.

In the TA1-class, Plaçais is gently starting to build a solid claim on the finale spoils.