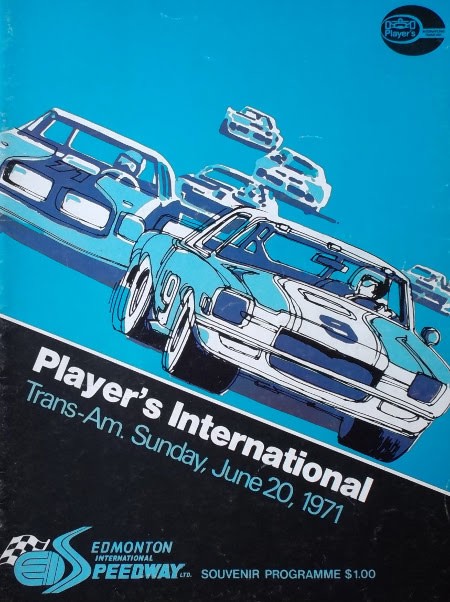 As the race neared, one topic captured both conversation and imagination in the Edmonton pit-lane: a picture in a local tabloid. It showed a Mopar-official in less than flattering circumstances. The man had obviously indulged in serious abuse of alcoholic beverages. And at the exact moment that he desperately needed them, the toilets decided to play hide and seek. Causing the Detroit-official to have the consequences of his drinking smeared out all over his shirt.

There was empathy for the man though. The qualifications had again caused the Mopar teams much headache. A thing that hit them as something of a surprise.

Upon arriving at the track, the pony car teams had indeed been in high spirits.

“What an excellent track,” one Camaro-driver was quoted following his initial laps around the track. “It will finally favour the straight-line speed of our mad beasts.” Exactly what the muscle cars needed to finally get some kind of retaliation.

Their subsequent disappointment, when qualification was finished, could therefore not have been more sour. The tiny Euro-brats had again swooped everything from pole to 6th place on the roster. The first of the American brutes being Beretta’s fierce Firebird in 7th place. Immediately followed by Plaçais’ Barracuda. Together with Alfred Ruys de Perez’ Camaro in 10th place, that made for 3 power-brokers in the top 10.

Not a bad result compared to the previous 3 races. Where not one American car had actually managed a qualification in the top 10. Yet, many felt that this relative success was mainly due to the low number of Euro-cars. Only 8 of the under 2.5 litre-cars had indeed made the journey to Edmonton.

Amongst the absentees was Goissen, winner of the two previous races. A commercial engagement promoting some kind of new sport, prevented him from making it to Alberta. Rumour had it that Goissen was promoting something that involved sliding down snowy slopes on floor boards. Which caused agitation with the BMW-officials, always very alert when it comes to the reputation of their brand.

It didn’t stop championship leader Le Pihive to benefit from Goissen’s absence. He secured his first pole of the season. His white Escort with the elegant blue stripes leading the field into the first corner.

That first Edmonton corner is a daunting affair. A fast left-right sweeper, where the cars arrive at top speed. To then convert into a long right hander that narrows to a slow sharp turn.

The section had been the scene for some fearsome looking crashes in the practice sessions. And anxious anticipation floated over the track as the field prepared to tackle the complex in tight formation. As the starting flag dropped, everything went well however and anticipation quickly floated.

With the race on its way, the disarray of the American teams quickly evaporated. For some inexplicable reason, the Euro-cars had all fluked their getaways and, except for Le Pihive and Norburn, got swallowed in a melee of Detroit rumble.

One driver of the American cars was heard saying: “We finally managed to stuck those Bolshoi Ballet-wimps in our little Mopar locker. And it was good fun to see them struggle their way out of it.”

A struggle that not all concluded with equally good results.

Chapman’s BMW, who had qualified third on the grid, was one of those missing his start. And then swamped away into a heap of V8-powered quicksand. Finally running 12th and throwing in the towel in the 71st of 75 laps.

Young Voigt enjoyed more success. He made an utter mess of his start, which left his grumpy mechanic rudely cursing in the pit-lane. It threw him back to 13th place. But he then took control of the situation. Even if it cost him blood, sweat and more than one tear.

Within the space of 4 laps, he rejoined the top 10. And started a steady ascension that would result in his best season finish up to now.

He crossed some troubled waters though. Such as while passing Ruys de Perez. He had been vainly attempting to pass the Camaro for some laps, when he made a move on Ruys de Perez into Meldau Corner. It gave him a slight edge on the stretch to Green Bank. But de Perez could sufficiently defend to force Voigt on an outside line. Voigt was left with no other option but to tackle the long right hander to the far left. Pushing his left wheels onto the slippery grass. Drastically slowing the New Yorker’s BMW down.

At the same time, Ruys de Perez came sliding out of the corner on full opposite lock. He could not avoid Voigt and the heavy Camaro collected the tiny BMW. Voigt was thrown onto the grass. Luckily, he avoided hitting anything but he lost heaps of time and at least 4 spots.

In the closing stages, Voigt was running fourth, with Plaçais third. Which made those cheering for the Mopar teams go berserk. Finally, one of the big brutes seemed set to secure a podium finish.

The Barracuda held a solid lead over the BMW. But totally out of reach, the Barracuda was not. And thus, young Voigt set out to mount a spirited come-back.

During his charge to regain the last podium spot, he showed forceful driving at times. While having Plaçais firmly in his view, he needed to lap the yellow Javelin of Parker. Something he managed quiet easily under braking for Meldau Corner. Then, on the run to Green Bank, Parker used the power of the Javelin to haul his beast back alongside the tiny Beemer. Voigt was however having none of it. And moved completely over to the other side of the track. Preventing Parker to pull up.

Many things could be said about that move. But there really is only one term to adequately describe what Voigt was doing: blocking. And that came as quiet a surprise from a driver who had formerly been accused of lacking aggressiveness. Of not having what it required to make it as a race driver.

It in any case allowed young Voigt to snatch the final podium place from Plaçais.

With Le Pihive and Norburn out of reach sailing to the first two spots, that meant yet another all Euro podium. Plaçais in the Barracuda secured fourth, and with it the class-win in the over 2.5 l class.

As I was walking back to my car, I passed by the BMW-box. And noticed Marcelo, Voigt’s old mechanic, gently padding the battered BMW. A soft smiled curled his lips into a sea of melancholy.

Young Voigt sat in the corner of the garage, silently stirring his cup of dark tea. He hadn’t gotten many compliments for his podium finish. But, contrary to the previous races, he hadn’t been welcomed by an army of scolding mechanics neither. And he seemed perfectly content with that.

Often, just avoiding the dreaded indeed feels so much better than reaching for the unlikely. A wisdom few grasp better than a sports car driver.